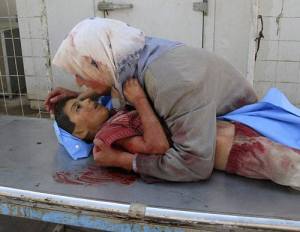 Often a photograph can convey the emotions and sorrow of life far more poignantly and powerfully than any words can. In this award winning photograph, entitled “Last Touch” by Adem Hadei of the Associated Press, an Iraqi mother embraces her young son fatally shot in Baqouba in 2007. The attention span of the corporate media is egregiously short, much more so with the established political class. They have all moved on from Iraq just as they have done so with Vietnam, Laos, Cambodia, Nicaragua, El Salvador, Indonesia, Libya and every other nation that had the grave misfortune of being the recipient of American “liberation and democracy.”

The hawks in Washington never cease their circling above, salivating for another nation to ruthlessly invade, rape and plunder for profit. But the embrace of this mother and her dying child serve as an eternal rebuke of such follies. Our feckless and soulless leaders be damned. They cannot ever erase the human capacity for selflessness and compassion. Their songs of war are hollow husks of bitterness compared to the chorus of mothers who call us all to look at the faces of their sons and daughters, slain on far flung fields everywhere by the callous whims of imperialism. And their light will far outshine the lust for power and avarice that drive men to madness and endless wars of conquest.