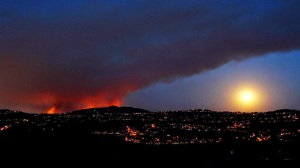 All across California records were shattered today. It is hot, very hot, too hot…and it is only May. Santa Ana winds, hot dry air from the desert, have always come in October and November, not in May. Yet they swept through California this week fueling wildfires that are still raging. And it isn’t just here. Siberia has experienced massive wildfires this winter and spring. New Jersey too. Australia’s summer temperatures soared so high this year that they had to assign it an entirely new color on weather charts. Rain, flooding and wild weather has battered the UK and Ireland and the Mid and Southwest, as well as Pakistan and Afghanistan this spring. And drought is drying up the Amazon, the Middle-east, Southeast Asia and the American west.

There is no debate among scientists. Climate change is undeniable.

Even the record cold winter in the Northeast of the US is a testament to this, because warming has shifted the polar vortex. Now the North Pole is warming while its cold air is displaced, melting further the dwindling ice of the Arctic Sea. And this week we learned about the unstoppable collapse of the West Antarctic Ice Sheet which will eventually inundate coastal areas and cities the world over.

Not only is climate change happening, it is, in the view of the vast majority of climate scientists, human caused. Yes, the climate has changed in the past, long before humans entered the scene. Yes, climate is always changing. But there is a certain cognitive dissonance which continues to reign in circles that insist humans cannot possibly have such an impact on the planet, that these scientists are in it for the money, or that climate change is actually a good thing.

We know with certainty humans can effect major natural cycles and devastate ecosystems. One glance at the power of nuclear bombs or the massive deforestation taking place throughout the world confirms this easily. Humans have been able to literally alter nature to make certain plants, that were once toxic, edible, and to domesticate animals that were once hostile. So it should not be a stretch of the imagination to see how industrialized society, built on fossil fuels, is having a major detrimental impact on the climate.

The influence of the fossil fuel industry is also easy to track. Oil money fuels government intransigence and stokes conflicts the world over. The most profitable industry ever in human history is driven by greed. So the notion that climate scientists are in it for money is ludicrous and absurd. Arguably, they would do far better financially if they sold out to these industries like a handfull have done.

The world’s warming oceans are acidifying rapidly causing fish stocks and coral reefs to collapse. Variations of heat and cold extremes are making agriculture that much more challenging and potentially fueling several conflicts raging around the world. Storms now imperil millions of people on the planet due to their accelerating intensity. So no, climate change is not a good thing.

It is too late to pretend. It is too late to engage in “debates” with people who have their heads firmly buried in the sand. There is no use arguing about a tsunami with someone who stubbornly insists on remaining on a flooding beach. We need to gather up those around us who see what is happening and want to take action, and head to higher ground. With any luck we might be able to save something, while we still have time.

(Photo is of fires in San Marcos, San Diego and is courtesy of Luis Sinco, Los Angeles Times)