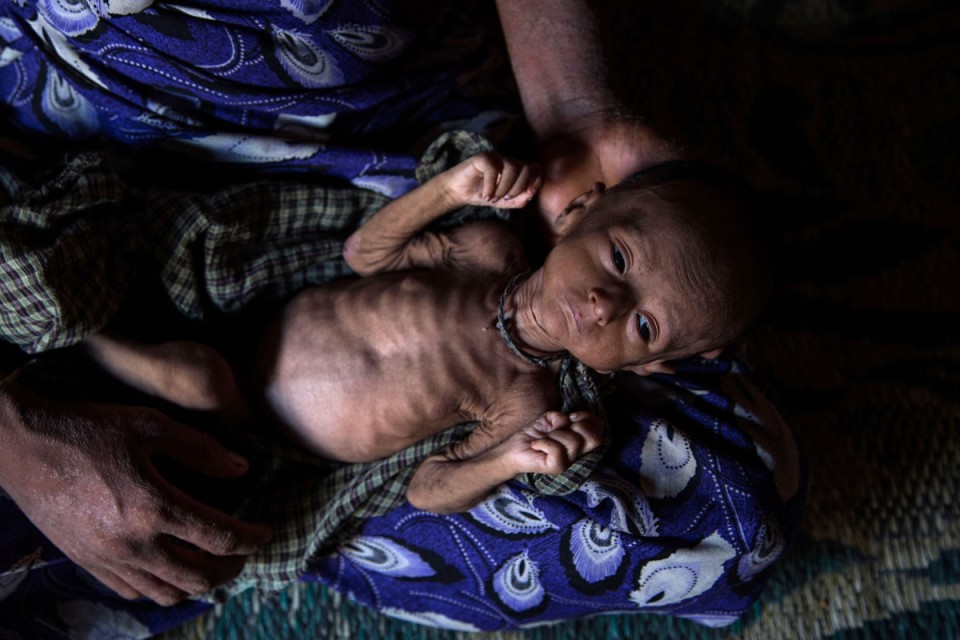 SITTWE, BURMA – MAY 10: Rosheda Bagoung, holds her malnourished child inside the tent at Dar Paing refugee camp on May 10, 2014 in Sittwe, Burma. 150,000 Rohingya IDP (internally displaced people) are currently imprisoned in refugee camps outside of Sittwe in Rakhine State in Western Myanmar. Medecins Sans Frontieres (MSF), the primary supplier of medical care within the camps, was banned in March by the Myanmar government. Follow up attacks by Buddhist mobs on the homes of aid workers in Sittwe put an end to NGO operations in the camps. Though some NGOs are beginning to resume work, MSF remains banned and little to no healthcare is being provided to most Rohingya IDPs. One Rohingya doctor is servicing 150,000 refugees with limited medication. Several Rakhine volunteer doctors sporadically enter the camps for two hours a day. Births are the most complicated procedures successfully carried out in the camps, requests to visit Yangon or Sittwe hospitals for life threatening situations require lengthy applications and are routinely denied. Malnutrition and diarrhea are the most widespread issues, but more serious diseases like tuberculosis are going untreated and could lead to the rise of drug resistant tuberculosis. (Photo by Lam Yik Fei/Getty Images)