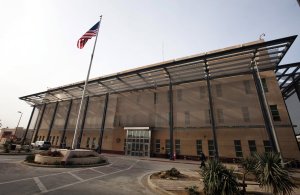 Fascist architecture has a long ugly history of leaving its mark on a society that has been pummeled and plundered. The US embassy in Baghdad is perhaps the best example of this. It stands as an architectural symbol of American imperialism. It is a monstrous, 750 million dollar fortress surrounded by high walls and checkpoints to protect its privileged inhabitants. It is larger than Vatican City and includes apartment complexes for embassy employees, a shopping mall, food court, an Olympic size swimming pool, a fitness center, a soccer field, and a huge basketball court. And as Iraqis struggle to survive in the chaos the US has created, this appendage of arrogant hegemony is protected.

Despite its facade mimicking democracy and freedom, it merely echoes dozens of other fascistic structures and monuments around the world. Its purpose is clear; to dominate the consciousness of the oppressed and the occupied. It stands as a cruel reminder to those under the thumb of imperialism, that “might makes right.”

But as all structures of its kind, it will ultimately be remembered for what it truly is; a banal crypt for tyranny and brutality.