The epic assaults being carried out against the vulnerable around the world at this very moment will determine the fate of our species and the living earth itself.  To the powerful this statement is hyperbole at its extreme, but to those of us on the other side there is no condemnation that is too exaggerated when it comes to the destruction of communities and of the biosphere itself.  The attacks are taking place along ancient rivers in the American Dakotas, in the life drenched rain forests of Ecuador, in historic olive groves in Palestine, in the melting tundra of the Arctic circle, in the sun baked Niger Delta, and in the war torn or misery laden shanty’s of Aleppo, Kolkata, Jakarta, Nairobi and beyond.  These may seem like separate instances to some, but they are a part of a global struggle and the outcome will in all likelihood determine our collective future and that of millions of other species that we share this planet with.

I believe that the intersectionality of these conflicts are indicative of a broader struggle over guiding principles and mythologies.  Some may see this as an oversimplification, and while I would agree that we should be careful to consider and respect nuance, context and individual histories, there are some general themes which may unite us while there is still time.  These conflicts have been with our species since we began to walk upright.  But now they are global in scale and there are two sides that should be identified above all others.

One side values living beings over profit, and sees protection of the water and the soil and the air as the most fundamental responsibilities of any society.  It values cooperation and generosity above individual ambition.  It shuns all forms of violent coercion, land theft and repression.  It is against aggression and wars of conquest.  It is the way of Community. The other is based upon the dominance of the physically powerful and suppression of the weak. It sees the living planet merely as a means for amassing material profit.  It commodifies everything, living and non.  It values avarice and ruthless competition over cooperation. It believes the only viable way forward is through suppression of dissent, ridicule, marginalization of the poor and the downtrodden, jingoistic nationalism and organized State violence.  It is the way of Empire. 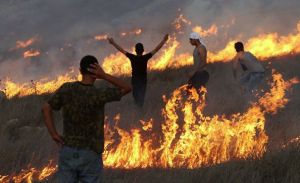 The language of Empire is duplicitous.  It employs the parlance of pale euphemisms like sustainability, austerity or free trade to obscure its true authoritarian and feudalistic intentions.  It encourages nationalistic sentimentality and racial and ethnic division to obscure the reality of its imposed classism.  It objectifies the living planet through clever marketing and branding with such subtle ease that it becomes ever more difficult to decipher and parse.  But in the end the Empire cannot cloak the stench of a dying world forever with catchy jingles, cynical ploys, shiny new objects, paranoid bigotries or vapid distractions.

In their quest to maintain and grow their coffers, the powerful see the dissolving ice cap as a strategic business opportunity for geopolitical advancement.  They see the growing difficulty in extracting high quality petroleum as an excuse to erase ancient mountaintops, pierce deep ocean trenches and scrape away primeval forests for less viable and more earth damaging fossil fuels.  They see growing inequities between us and the handful of people who own half the world’s wealth as opportunities for enhanced security walls and surveillance.  They see hunger and famine as a chance to litter the world with pesticides and chemically or genetically altered food or factory farms which are little more than massive concentration camps for sentient beings.  They see flattened forests and fouled rivers as a way of moving indigenous peoples into overcrowded, cordoned off corporate colonies for easier exploitation, social control and abandonment.  And if they continue on their path the world they are forging will rival every other civilization in history in atrocity, repression and misery.

The war the Empire is waging is not about isms or ideologies, it is about power, exploitation and wealth.  And to those of us being assaulted the cause is as urgent as it is dire.  It is literally about life and death.  We see the rising tides of an ever imperiled, acidic sea. We walk in the fallow fields where there may be no crops harvested tomorrow.  We breathe the acrid air choked out by smokestacks of insatiable, blind industry.  We see the walls and borders and checkpoints and guard dogs and police tanks and surveillance cameras and detention camps burgeoning as if unstoppable.  We hear the drums of imperialistic war being beaten every day of every year.  And we stand in shock at the unquenchable lust for wealth that stain the halls of power even as they dig our dusty mass graves.  When we sound the alarm or even raise concern about any of this we can expect to be ignored, chided or silenced by the powerful in the media, corporations, the military or political establishment or even clergy.  We anticipate being co-opted by the ruling oligarchy or by cynical corporate interests.  But we are weary of this kind of marginalization and we aren’t going down without a fight.

The powerful will not stop waging their war this year or next.  It will undoubtedly play out and grow for the next few decades even as the planet’s ecosystem’s spiral and crash, because dollar signs and dominance are all they truly understand.   This is not just another chapter in some unending saga of the human story.  It is not something that any resident of planet earth can afford to sit out.   If they are victorious this war may very well usher in the closing chapter of the human species and far sooner than anyone could ever imagine.  We must join with each other if only to ease each others suffering, or bring one small amount of justice to the oppressed, or to protect one small river way or field or stretch of beach.  This war they are waging is against the living planet and their own future whether they realize it or not.  But even if they do not care about their children’s future, we must.