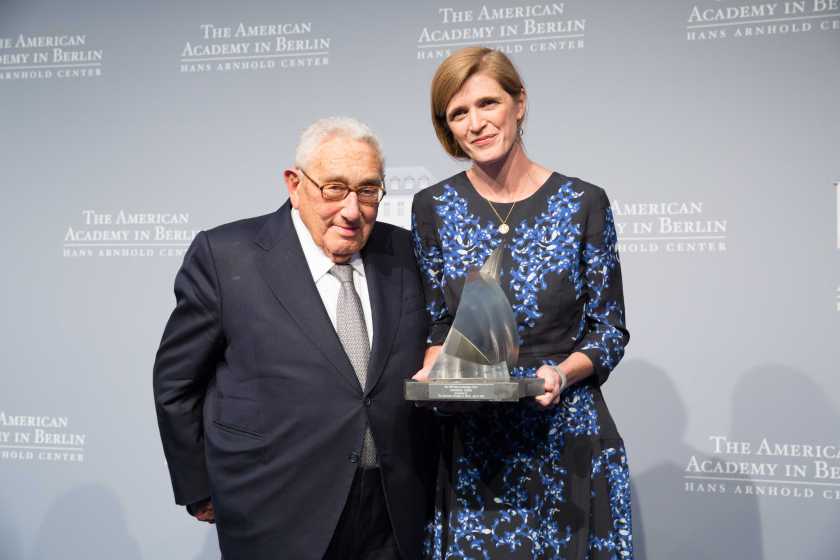 This week US Ambassador to the UN, Samantha Power, asked the Russians of they had any “shame” regarding the bombing campaign of East Aleppo. All one can think about this is that the duplicitous hypocrisy of the ruling elite that is routinely trotted out before us is staggering. I can condemn Syrian and Russian bombing of civilians in Aleppo, and do. Anyone of us who has not bombed innocent people can condemn the bombing of civilians, and we should. But for a person representing the United States, one of the most ruthless and murderous empires the world has ever known, to stand on the world stage and act as if it is some holy arbiter of mercy is a cruel and absurd joke of epic proportions.

Oddly enough I think people like Power, who lovingly accepted the blood stained “Kissinger prize” without irony (pictured), really believe in their piety. It is as if Iraq or Libya or Gaza or Yemen never happened or were strolls in the park. They manage to cover their acts of barbarism or the ones they are complicit in by using the same parlance of every other state aggressor. “Humanitarian intervention” or “liberation” or “war on terror” are the common rationales for their forays.

Does Power know of Kissinger’s murderous legacy? Of course she does. But when one plays the “human rights” jester in a court of ruthless imperialist wolves, one must dance the dance.