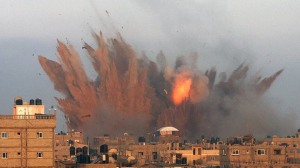 And in the end its everyone else, the mothers, the fathers, the children, the elderly, the artists, the scientists, the teachers, the doctors, the nurses, the janitors, the addicts, the pious, the prostitutes, the sick, the poor, the mentally ill, who get bombed, who get gassed, who get tortured, who have their water supplies poisoned, or who get maimed by the state, or who get blown apart to smithereens.

This lament, and perhaps epitaph, is in regard to what a sad species we are if this is the best we can do.

(Photo is of airstrikes by the American Empire against Syria in the last couple hours, source is Reuters).