“I am against justice … whenever it is carried out by a mob.” – Mokokoma Mokhonoana 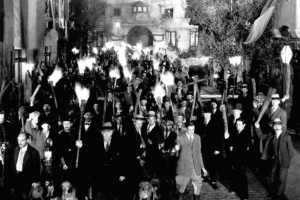 Most of us have seen this happen.   The old smear train tears through social media with nary a warning. Its rallying cries are generally unoriginal.  It is a simple recipe of character assassination, hearsay, bigotry, exaggeration, dehumanization, pettiness, hyperbole, misrepresentation and prejudice.  It’s seldom surprising, but always devastating for the target and anyone else in its wake.

Social media is prime terrain for these kinds of reckless ventures.  Its algorithms are honed to deliver pleasure inducing neurochemicals like dopamine and adrenaline as a reward for manufactured scandal. The fact that most of the witch hunters often do not even know the targeted individual or members of a maligned group lends it to enjoying an even greater success.  After all, anonymous acts of viciousness are far more easier to carry out and get away with.

At their core all witch hunts are emblematic of a deep sense of self loathing.  They are a vestige of puritanical thinking and the byproduct of jealousy and dissatisfaction with ones own life.  This is why they appeal to the sensibilities of the mob.  Carrying torches, real and figurative, that alight some pseudo-sense of self righteousness is a temporary balm for the tortured soul.  For a brief moment, they feel as if they are not alone.  They serve the purpose of momentarily obscuring the disappointments, banality and everyday terrors of life via the frenzied lynching of the other. 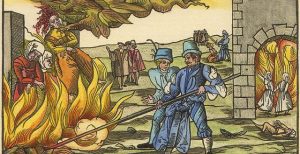 To the witch hunter the perceived imperfections of human beings are most often held in contempt. Difference is considered perverse or dangerous. This is reflected in fascist art which so often uses lynch mobs to further its ideology.  While it demonizes its opponents it blots out those characteristics it considers defects in humanity at large.  It uses human weakness and fragility as a bludgeon on anyone it considers strange or deviant.  It inflates a pseudo sense of supremacy while it unites people in cause against some contrived external injustice or existential threat.

But buyer of such noxious crusades beware!

Witch hunts can entice the unsuspecting by their facade of seeking justice, but they are notoriously mercurial in nature, and frighteningly subject to the ever changing winds of collective paranoia and animus.  Scapegoating becomes an end in and of itself.  And those winds have a tendency to blow toward many torch bearers in an instant, scorching them with the same priggish flames they once thought of as trusted companions.

1 thought on “Beware the Witch Hunter”