Let’s stop pretending that the war on Syria just began. The US along with Canada, the EU, the UK, the Saudis, Israel, Russia, and Iran, have been arming factions and reducing the region to smithereens for years, carpet bombing cities and killing scores of civilians in the process.

Let’s stop pretending that the US and its allies have any problem with dictators, death squads or authoritarian regimes since they have propped them up, applauded them, and aided them from Egypt to Honduras to the Democratic Republic of the Congo. And they have no problem with carnage if it happens to come from one of their client states, like the Saudi kingdom’s genocide in Yemen or Israel’s slaughter in Gaza.

Let’s stop pretending that any of the global players are troubled by or concerned about war crimes. In the West the selective outrage over the horrific gas attack on civilians in Syria is absurdly obvious when it comes to the fact that the US and its allies have used depleted uranium, napalm and white phosphorus and bombed hospitals and mosques, wedding parties and shelters as a matter of course. 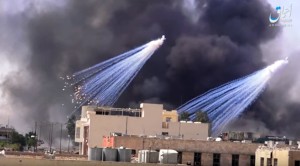 Let’s stop pretending that any of them care about Syrians or Syrian society either. While Russia has turned a blind eye to Assad’s crimes and bolstered his regime’s power to crush any meaningful dissent, the US, UK and EU have funded extremists, foreign mercenaries and reactionary militants who have terrorized local populations almost as much as the regime itself. They’ve also made it near impossible for refugees and others trying to flee the misery and chaos they have helped to create.

Let’s stop pretending that any of this is about human rights or the rule of law, or that this will bring about an end to barbarism since the cold hard fact is that stocks are surging for Lockheed Martin, Grumman Northrup and Boeing. This is indeed a global, capitalist arrangement that ultimately benefits the coffers of the wealthy. Endless war, chaos, terrorism and state violence are, to put it bluntly, a boon.

The escalation this time may signify a new level of madness. Thanks to unhinged psychopaths like John Bolton who is back in a position of power, and the generals of the military industrial complex, we are being led down a path that could easily begin a world war with other nuclear armed powers. We’ve been down this road recently with North Korea, so we should not downplay that grim fact because it really could quite literally spell out the final chapter for civilization at any given moment.

So should we be angered? Yes. Surprised? No. While the powerful have never once tried to hide their crimes from us, they would prefer that we forget them. They would like us to pretend that their hypocrisy and selective outrage makes perfect sense. So the choice is really quite simple. We can either continue playing along in this bloody theatre of the absurd or stop being played for fools once and for all.