I am so saddened to hear of the death of Sarah Hegazy. She was a courageous anti-capitalist Queer activist who was imprisoned in Egypt in 2017 following a music event in Cairo. Her supposed “crime” was the simple gesture of raising a rainbow flag at the concert. She endured terrible abuse in prison and had to flee to Canada following her release for her own safety. While she was in exile, her mother died, and she was unable to say goodbye. Yesterday, she took her own life.

As LGBTQ people, we often face prejudice, discrimination, alienation and violence from our own communities. The toll on our mental and emotional health can be overwhelming and for many the pain often feels like too much to bear. But for those in deeply conservative societies, it can be even more excruciating. Queer folks face terror and brutality all around the world. But Egypt, in particular, has been extraordinarily repressive and brutal in this way.

Under the corrupt leadership of Abdel Fattah el-Sisi, a military junta rules the country which has waged war on any kind of dissent, political or otherwise. Imprisonments, beatings, torture, extrajudicial killings, disappearances and sexual violence against critics are routine. And this has only emboldened the most ultra-conservative and fascistic elements of the society. For instance, Muslim clerics and Christian priests have been relentless in their persecution of the LGBTQ community, as well as women and non-conforming people. So Sarah’s courage in the midst of this was something incredibly formidable.

These words are the last ones Sarah wrote:

“To my siblings,
I tried to survive but I failed; forgive me.
To my friends,
The journey was cruel and I am too weak to resist; forgive me.
To the world,
You were cruel to a great extent; but I forgive you.”

Rest in peace and in power, dear Sarah. You did not fail and there is nothing to forgive. No human being should endure what you endured. But you will not be forgotten. People of conscience will carry your light forward, and it is something that we will never allow to be extinguished by hate. 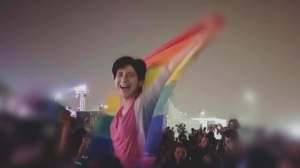 2 thoughts on “Raise the Flag for Sarah”