Apparently, there are whole bunch of middle aged, middle class white folks losing their minds over the end of “Aunt Jemima.” The brand capitalized on the “mammy” stereotype, a vestige of slavery that portrayed older black women in a cartoonish manner. For over a century following the Civil War many white Americans used the avatar on the plastic bottle as a surrogate for a real mammy. It is one of many racist, demeaning and dehumanizing caricatures that have a long legacy in the US.
There is even a myth going around social media that the inspiration for Aunt Jemima “died a millionaire.” Nancy Green was indeed born into slavery, and she was hired to promote the brand. But the stories she told to largely white audiences were all fabrications with the intent of romanticizing slavery to sell a product in an era of Jim Crow segregation and lynching of black and brown people. Green did become an activist against poverty and for racial justice, but she worked as a housekeeper up to a few years before her death. There is no indication that she had any fortune to draw upon.
The end of one stereotype is a good thing. But before anyone is inclined to praise Quaker Oats or its parent company PepsiCo, we should understand that corporations have no interest in justice. Their sole concern is the bottom line, and that is impacted by public opinion. It is quite simple, the demographic audience has shifted, and middle aged, middle class white folks aren’t quite as important to it as they used to be. It is quite ironic that the so-called “free market” that they have constantly praised is, at least in this case, working against their prejudices.
And we should not lose sight of the fact that the product itself hasn’t changed a bit. Indeed, the poisons peddled by the food industry are more egregious than the branding. After all, the ingredients of this “syrup” are, first and foremost, high fructose corn syrup and water with cellulose gum and “FDA recognized chemical preservatives” like sodium benzoate and sodium hexametaphosphate. The pancake mix includes bleached flour, sodium aluminum phosphate and “traces of milk.”  Yum!
So maybe, along with jettisoning demeaning and dehumanizing stereotypes we should also jettison a “food” industry which has poisoned people for profit for decades. 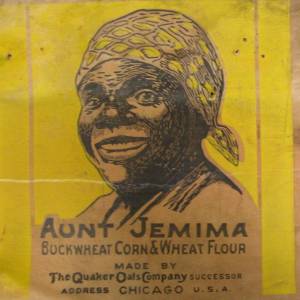 3 thoughts on “Aunt Jemima and the Poison she Peddled”