From a months worth of rain falling in a matter of hours, to wildfires devouring the lush rainforests and the icy Arctic tundra, we are witnessing records being broken one after another with each passing day.  One does not need to be a scientist to see a shocking increase of extreme weather events.  Yet, still, denialism persists.  “We must grow the economy!”  “Drill, baby drill!”  It is madness on an epic scale.

The earth doesn’t care about our economy.  She has no use for our political protestations either.  She responds only to our folly.  And she is groaning from the injuries we have inflicted on her.  She has a fever; and if she does not treat it soon the results will prove dire for her future. 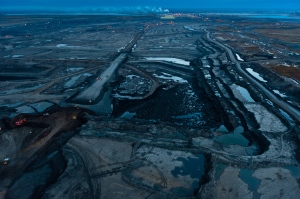 No greater visual exists to demonstrate her malady than the Alberta Tar Sands.  It is a blight that covers an area the size of Florida and can be seen from space.  It is a cancerous tumor, a melanoma on the skin of the earth that continues to grow and metastasize, spewing its noxious breath into the atmosphere while being fueled by the fallacious myth of infinite growth on a finite planet.

The West continues to be mired in a corporate fantasy world, drowning as we toast our good fortune. All the while the real world, that every species relies on for sustenance and survival, is withering and suffocating before our eyes. Those who call attention to the ecocide are often maligned and marginalized, living as exiles from the Kingdom of Eternal Optimism.  The oceans are acidifying, intractable drought threatens our food and water supply, floods threaten our cities.  We are facing extinction; not just of countless other species but of our own.  Yet there is little to no alarm or pause from the mass media and popular culture.

We may be alone in this universe, but it is unlikely.  Perhaps it is filled with other species who made it as far as we did and survived or even thrived.  Or perhaps it is littered with the bones of long dead societies who had similar aspirations.  We may never know.  What we do know is this, the planet that we live on is rapidly changing before our eyes.  The earth, our only home, has a raging fever.  And she will not wait for our over indulgent deliberations.  Her prognosis is good though.  She is going to survive her disease.  For humanity, however, it isn’t looking so good.