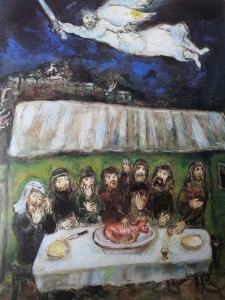 It is Passover, the Jewish holiday celebrating freedom from slavery. The details of the story or its historicity are not important because all cultures have myths that provide foundational meaning; and rituals provide us an opportunity for the tradition of storytelling as well as reflection. Arguably it is this myth that has been the most influential in Judaism, which has a long and rich history of ethics and social justice. Two thousand years ago the great teacher Hillel said “whosoever destroys a soul, it is considered as if he destroyed an entire world. And whosoever that saves a life, it is considered as if he saved an entire world.” Bearing centuries of pogroms and persecution which led to the ultimate horror of the Holocaust, Jews have maintained a cultural identity that defied the odds. This heritage is rooted in liberation and justice. So it is painful for many Jews of conscience to see how the Israeli regime has sullied much of that past with the stain of apartheid, racism and the ethnic cleansing of the Palestinians.

The Zionist experiment may have been born of the injustice of antisemitism in Europe; but it ended in reflecting the cruelest and most brutal forms of European colonialism. Theodor Herzl (1860 – 1904), one of the founders of Zionism, said: “We shall have to spirit the penniless population across the border … while denying it any employment in our country.”  David Ben Gurion, Israel’s first prime minister, stated: “We must do everything to insure they [the Palestinians] never do return … The old will die and the young will forget.”  And in 1983 Raphael Eitan, chief of staff of the Israeli Defense Forces explained: “When we have settled the land, all the Arabs will be able to do about it will be to scurry around like drugged cockroaches in a bottle.”

But as Palestinian poet Mahmoud Darwish said so eloquently:

But the makers of the nakba, of the catastrophe, failed to break the will of the Palestinian people and to eradicate their national identity, through diasporisation, through massacre, through pretending that the mirage was a reality, through the production of a counterfeit history. In the past five decades they have failed to push us into absenting ourselves or to cast us into a state of amnesic dementia.”

Today this experiment is on shaky ground and it has created a country that lives in a state of constant paranoia and aggressive nationalism. Many Jews around the world and within Israel have and continue to fight against the injustice this ideology has wrought in the struggle for equal rights for all residents of the region and not just one privileged ethnic group. They understand that if any nation wishes to be considered a democracy it cannot persist in decades long systemic discrimination and military occupation. 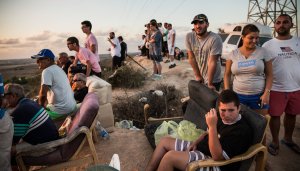 Occupation generally leads to social hatred, distrust and antipathy towards the other. In Israel this was no more clear than when Israelis gathered on a hilltop outside the town of Sderot to watch the destruction of Gaza this past summer. Many were left scratching their heads at such callous disregard for an entire population with no where to run. It is true that residents of Sderot have had to deal with terrifying random rockets, but the disproportionate response by Israel was surreal and horrifying. Over 2100 residents were killed, over 500 of them children, and tens of thousands left homeless by a bombing campaign that leveled entire neighborhoods. Hundreds of thousands were left scarred, both physically and psychologically. Hospitals, schools and UN shelters were bombed. Boys were killed playing football on the beach, sports fans were killed in a cafe watching the World Cup on t.v., and whole families were wiped out in the blink of an eye.

Sderot itself is an example of one town out of hundreds that was cleansed of its Palestinian residents in 1948 in what is referred to as the Nakba, or Catastrophe. Scores of Palestinians were made refugees in the Gaza Strip straining the resources of the existing residents. Everyday they look at the homes that were once theirs.  Today Gaza is blockaded on all sides by Israel and Egypt. Food, construction materials and medicine are heavily restricted. The water treatment plants, already in dire shape, were decimated by Israeli bombing leaving nearly 90% of the water contaminated and undrinkable. Fishermen are routinely fired on if they stray outside the boundary of a few nautical miles. The UN estimates that Gaza will be unlivable by 2020. In the occupied West Bank Jewish settlers, under the protection of the Israel Defense Force (IDF), routinely hack down or burn Palestinian olive trees, destroy their wells and harass village residents. The city of Hebron is segregated and Palestinian businesses and homes have been walled up by the IDF. The wall of separation has divided towns and prevented farmers access to their fields. And Palestinian houses are demolished leaving whole families homeless.

This kind of sustained injustice and dehumanization infects both the victims and their victimizers. And its persistence creates a broken people, unable to face the cancer of their hate and entrenched in paranoia. But over the years, despite it being an uphill battle, Jews and Palestinians have come together to fight the occupation.  Jewish ethics have informed environmental and social justice movements around the world, from the Civil Rights movement in the United States to the fight against apartheid in South Africa. But like many other traditions it has been co-opted by those only interested in war mongering, sowing fear and maintaining power. Reclaiming it is essential because if there is anything that should be communicated this Passover it would be the message of liberation from oppression. It is a moral imperative that is rooted deeply in the human psyche, and it is one that belongs to all people who seek justice for the oppressed.