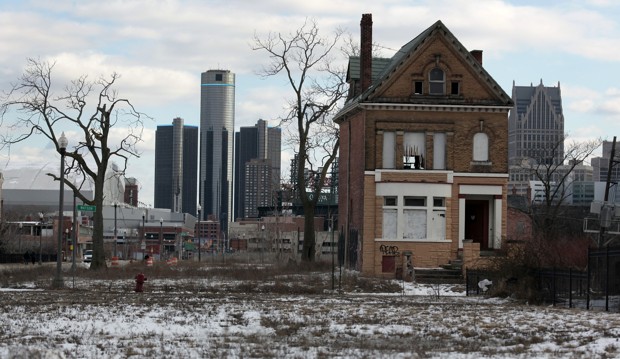 A vacant, boarded up house is seen in the once thriving Brush Park neighborhood with the downtown Detroit skyline behind it in Detroit, Michigan March 3, 2013. Michigan Governor Rick Snyder cleared the way for a state takeover of Detroit, declaring that the birthplace of the U.S. automotive industry faces a fiscal emergency and that he has identified a top candidate to assume its management. Friday’s declaration by the Republican governor virtually assures that the state of Michigan will assume control of Detroit’s books, and eventually decide whether the city should file the largest municipal bankruptcy in U.S. history. REUTERS/ Rebecca Cook (UNITED STATES – Tags: CITYSCAPE REAL ESTATE BUSINESS POLITICS) – RTR3EJDQ