Travel anywhere across the “developed world” and you can find them. Featureless monoliths of concrete, glass and steel jutting out from soulless landscapes that house human cogs in a metaphorical machine. The cold emptiness of their facades tell us exactly who built them and what matters to them. Spoiler alert: it ain’t us or the planet we all depend upon.

These indifferent fortresses belie a dying civilization. They sit atop the mass graves of once vibrant meadows and forests scraped off the land, and wetlands that were brimming with life, now drained of their water. How easily they mask our insecurities. Many, if not most, of us in this society still support the idea that it is justified to be charged rent to live on the planet of our birth. And many cling to the hope that they will rise above their station to a place of success in this moribund spectacle the powerful have crafted. These phallic monuments to the ego stand as sentries, guarding the lies of empire and defending the insatiable demands of consumer capitalism.

Success in this suicidal fantasy is defined by the accumulation of imaginary numerals and the acquisition of objects, or property, or even people and other living beings. There is no self imposed limit to its expansion. It is ravenous and pays no attention to consumption except in its encouragement. But the natural earth on which all of this is derived is beginning to crumble under our feet. And this culture of self absorbed, self-medicated misery is beginning to unravel before our eyes along with it.

The response of a society to its impending demise is in accordance with how it was formed, who leads it, what it cares about, and what has kept it going. Ours has been built through conquest, industrialization and war, and upon the backs of billions of human beings not fortunate enough to be born into its higher ranks, and a myriad of species slated for exploitation or eradication. It is led by sociopaths who care only for their vapid self-importance and meaningless lifestyles. And its heart beats with the constant infusion of new blood. Whether that blood be of the earth or of other living beings is of no consequence to it. 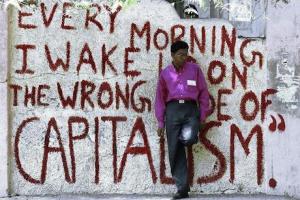 This kind of society is incapable of responding to suffering with empathy. It cannot be reasoned with. It knows only distraction, violence, control, mania and alienation. And as its foundations disintegrate, it will become even more brutal and detached from reality. It will cast the weakest, the foreigner, and most vulnerable as scapegoats for its malfeasance and failure; and in the end no one will be spared its fury. Once a person of conscience begins to realize that they live in an empire that has savaged the planet and destroyed dozens of societies the world over, it becomes impossible to be swayed by puerile patriotic sentimentality. The misery this machine has caused, and continues to cause, blots out any feeling of pride.

But the American Empire, and industrial civilization itself, appear to be destined to meet their end sometime within this century. It has reached its upper limit and the earth is beginning to answer to its folly with unmatched rage. Think this is hyperbole? We now know with certainty that the seas will rise and swallow cities whole, and drought will expand to bleach fields like bones in the sun. It has already started in many places. Beaches are eroding, wells are running dry, and people are beginning to flee.

All of this leaves us with few choices, but not without hope. The question is, what do we hope for? Is it the status quo, keeping the privileged few of the planet in the current state of relative comfort while the rest of the planet languishes in abject misery? Or is it for the salvation of technology to somehow sweep all of our over-indulgences and careless extravagances away? Or is it for some business, religious or political leader to rise up and answer all of our problems miraculously, like a magician pulling a rabbit out of a hat? In the quickness of time, none of these options are viable.

There was a time when our ancestors understood that they were merely one species in a chorus of billions, who all had a birthright to this world. But that ended when some decided that our dominance and luxury were more important than a living planet. Now countless species are going extinct from our excesses and recklessness each day, and we are beginning to realize that we are not so powerful as to not be one of them at some point in the future. One way or another the earth will choose for us. We can only hope that she can forgive us for our blindness, and bestow on us a mercy that we rejected for our own human family and scores of other species that have had the misfortune of crossing our path.

May clemency smile upon us.

2 thoughts on “Hoping for Clemency”