“Our own life has to be our message.” ~ Thích Nhất Hạnh

This month the solstice gently ushered us all into a new year. In times past, this occasion was often viewed as an opportunity for reflection.   It is a turning point when the sun begins to intrude into our lives just a bit more each day, casting away shadows, one by one.  As the calendar scrolls down another year I have been reflecting on my personal journey as it relates to the changing and tumultuous world around me.

2015 was a year where climate change, endless war, mass migration (the biggest since the second World War), the growth of the repressive, militarized police/surveillance state and environmental decimation all appeared to be converging at a crossroad, with industrial civilization itself teetering on the brink of collapse as a result.  Has it happened yet?  No.  But collapse should be understood as a nonlinear phenomenon. It is more akin to the sputtering engine of a damaged airplane, dying in fits and starts before the ultimate plunge. 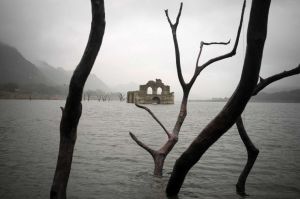 The acknowledgement of any of this can send us in the direction of conscious grief and deepened empathy or paralyzed despair and indifference.  It has the power to “widen our circle of compassion” as Albert Einstein encouraged and view the death of one thing as the foundation of life for another, or find us at a dead end of alienation and apathy.  Ours is a culture of denial, fraught with vapid phantoms peddling sadistic entertainment and extolling rapacious consumption on a planet with finite and dwindling resources.  It is a theater where all the players are mindless and the audience is blind.  When ones eyes are pried open a searing light is cast on a stage of depravity and misery.  But this experience, traumatic as it is, can also be a catalyst for “a fundamental change in approach or underlying assumptions.”  A paradigm shift.

In our society narcissism has become a celebrated virtue; but I have never been very good at separating myself from the suffering of others.  A forest somewhere is felled, I feel as though my body has been hacked into.  A refugee is demonized, I feel as though it is a personal attack on my own character.  Another species goes extinct, I feel as though a piece of my soul has died.  Mind you, I am not admitting any of this to curry admiration in anyone’s eyes.  In fact, this part of who I am I consider deeply private and I often struggle with my own grief as a result of this kind of association.  But how can I, as Thích Nhất Hạnh says, make my life my message without acknowledging this pain publicly?

Industrial, consumer civilization, with all of its self destructive trappings, deeply wounds the soul as much as it wounds the body, communities and the living earth itself.  But wounds, both physical and psychic, have a remarkable ability to heal with an intelligence that is beyond our consciousness.  The soul, just like the body, will repair itself too leaving a scar as a testament to the struggle and a symbol of solidarity with others who suffer.  But this can only happen when we show it to the world.

A physical wound must be covered for a certain amount of time to protect it from infection, but its bandages must eventually be removed exposing it to fresh air if it is to complete the healing process.  This is also true of wounds to our soul.  We must eventually reveal them to the world and be receptive of the empathy that can bring.  This, in turn, becomes our message.  It is up to us, though, to nourish the conditions that make this healing possible, and to apply whatever balm is necessary.  Healing our wounds does not spare us from death.  But in nature, even death itself is a fount for the renewal of life. 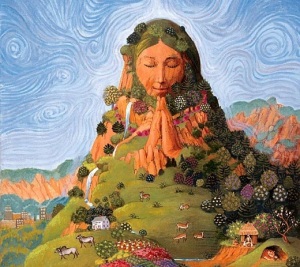 We cannot stop the convergence of very bad things in this world. None of us can hold back the rising seas or quell the warming air. And the specters of war, avarice and tyranny continue to haunt our world every day.  In truth, the end of all we know may be closer than any one of us could fathom. But that does not mean that all is lost.  In her book “Love in the Age of Ecological Apocalypse: Cultivating the Relationships We Need to Thrive,” Carolyn Baker eloquently expresses how we can react to all of this:

“As the bearers of conscious self-awareness on this planet, we have failed miserably thus far in recognizing our inextricable oneness with the universe. Whether we can refine this innate capacity in time to prevent the annihilation of the Earth—a travesty in which we have consciously and unconsciously colluded, is unknown. Nevertheless, in the remaining days of our presence here, we can love the Earth and we can love all its sentient beings.”

Indeed hope does exist, but it is meaningless unless it expands our capacity to love.  This truth is the paradigm shift we are all in desperate need of, and one that will be even more urgent in the troubled and stormy days that lie ahead.

4 thoughts on “Another Year, Another Paradigm Shift”