With the ascendancy of Donald Trump to the throne of the American Empire there has been mounting opposition from what has been referred to as the “Deep State.”  This is a term that refers to the idea of a shadow government which pulls the strings behind the scenes of the public face of the elected government.   The CIA, NSA, FBI, DHS, and DoD, among others, are often sited as the key players here and even a tertiary glance at history will attest to why this is so.   To be sure, this term has been over used by unhinged talk show hosts like Alex Jones, and it often provides cover for a thinly veiled and utterly reprehensible antisemitism.  But it isn’t a “conspiracy theory” to note the great power that these agencies and whom they represent have over American foreign and domestic policy.  Their opposition to Trump is not so much ideological as much as it is about influence.  To them Trump is an unpredictable, egotistical mess with mental instability on a grand scale.  This makes him virtually uncontrollable and that terrifies the elites. 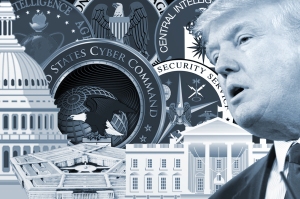 The Capitalist class has enjoyed the riches gleaned from neoliberal economic policies for decades; and Trump’s anti-globalism and xenophobic talk threatens their bread and butter.  To be sure, their thievery is as abhorrent as Trump’s coming kleptocracy; and both signal the death throes of global capitalism. But the Liberal class and even some on the Left, have been aligning themselves with the oligarchy in order to derail and depose Trump.  That they are inadvertently supporting increased militarism in a world where nuclear annihilation is still a menace, war profiteering for the wealthy elite, and the return of a new Cold War hysteria is of no concern to them.  One must wonder if they have really thought any of this through.

Let’s face it.  Trump is vile, but he is an easy target. His rise provides those of us on the left with a convenient, external decoy to lob all our fears and failings at.  And although he may be emblematic of the essential rot that typifies late stage capitalism the powerful institutional forces that are seeking to depose him wish only to do so in order to sustain the very machine from which he emerged.  A machine of absurd consumption of dwindling resources and war profiteering for the benefit of a few, on a planet whose biosphere is in a state of collapse thanks to the relentless marauding and pillaging.

It’s true that Trump has gathered around him a collection of religious extremists, racists, xenophobes, misogynists, science denialists, Islamophobes and militarists. But his overt bullying, déclassé style and grotesque vulgarity are really the only thing which distinguish him from the powerful elite whose plutocratic tyranny long preceded his infamous meteoric rise.  They have always championed the bloody plunder of the Capitalist order of things because it has maintained their hegemonic control and filled their coffers with untold fortune. Granted they generally did this with the veneer of respectability through exploiting identity politics; but this was a diversion they used to placate the sycophantic Liberal and bourgeois classes while they fattened up on ill gotten gain and carpet bombed the poor of the world.  Make no mistake, their Machiavellian machinations are one and the same with the orange tinted megalomaniac who is about to sit in the Oval Office.  It is his loathsome, distasteful and scurrilous demeanor they find most displeasing, not his love of Capitalism. 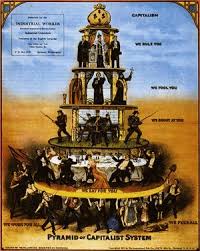 It is ironic to me that so many are looking to this very same corrupt establishment to lead the opposition to Trump and his band of thieves. Certainly politics makes strange bed fellows, but few seem to question what will happen should they succeed in deposing him.  Do any of them really think the CIA, DHS and all the other nefarious institutional players will cede power to the people, especially in a time of economic strife, ecological failure and geopolitical wrangling?  Do they remember who it was who has led wars and directed coups to topple democratically elected governments around the world?  Do they realize who it is these institutions really represent?  Do they care?  The answer is not too difficult to find.

An insidious and pervasive authoritarian fascism is embedded in every institution that controls or influences the US and it will not cede anything willingly to anyone. They protect the robber barons, industrialists and the aristocracy and their opposition to Trump is rooted in a defense of class privilege, not a love of democracy.  And the Liberal class has always stood as a bulwark of defense for this system, carefully guarding their own privilege to hold a seat at the table while casting crumbs to the grubby masses.  In desperation they will look to virtually anyone to protect this privilege against its inevitable decay.

Without a doubt the Trump regime is poised to speed up the unraveling of the American Empire.  The idea that a narcissistic buffoon like him could have such power would be comically absurd were it not so disastrous for the climate, the water and already marginalized and oppressed people.  But every administration, Democrat and Republican, in the last few decades has led us to the Age of Trump.  Indeed, President Obama created the conditions for a more aggressive fascism with the sweeping powers he granted to the Executive branch.

Now Trump will be able to detain or assassinate any American citizen without due process and will be able to crush dissent with impunity thanks to “anti-propaganda” measures designed to limit, intimidate and curtail freedom of the alternative press. Obama also led the way in deporting more undocumented people than the previous administration, prosecuting more whistleblowers than all US Presidents combined, increasing aid to belligerent regimes in Riyadh and Tel Aviv, supporting right wing coups like the one in Honduras which has caused the murders of scores of indigenous and environmental rights activists, and pulverized the poor in seven nations with over 26,000 bombs in his eight year reign. Trump will likely succeed him in this blood soaked legacy, but to sugarcoat this horrific past and its impact on the future would be both intellectually dishonest and ethically impoverished.

Trump, his minions and the new brand of authoritarianism must be opposed and the Left needs to mobilize quickly.  But this cannot be done effectively unless the system which produced him is recognized as the real menace.  It is the global Capitalist class which are the “men behind the curtain” so to speak.  Aligning with the powerful to oppose the powerful will only end up serving their interests alone, and it will merely feed a machine that is hellbent on leading our species, and every other, toward certain destruction.   Indeed, this kind of tactic will be a no win situation for everyone.