The resurgence of white nationalism in mainstream American politics has left many nonplussed and baffled.  White power flags, tattoos and symbols have made a stunning comeback, and they are coupled with threats, violence and Nazi salutes at huge rallies in support of presidential candidate, and front runner, Donald Trump.  At a recent event one supporter shouted at a protester “go to fucking Auschwitz,” and in a rally held last month an audience member unabashedly asked the candidate how “we are going to get rid of” Muslims.  Mr. Trump did nothing to condemn this overtly racist point of view.  This is a phenomenon that should not be downplayed or dismissed as an anomaly.  Indeed, it is representative of a much larger and far more dangerous feature of American society itself.

There has always been a persistent strain of fascism in this country, one that has been poised to sweep in to power the kind of charismatic authoritarian of the Hitler/Mussolini stripe.  This is no more visually apparent than within Trump’s base. Stripped of agency and laden with humiliation, Trump supporters are the very emblem of an unforgiving vengeance within the disenfranchised mob.  Torches and pitchforks aside, these demoralized masses are more than ready to pounce on the last vestiges of an anemic, American civil society already weakened by the barbarity of neoliberal (free market) capitalism and plutocratic despotism.  And with environmental catastrophe and economic meltdown ever looming, this so called “fringe” may just succeed in doing the unthinkable.

With the obvious implosion of the Republican Party underway many Americans hold fast to the myth that the Democrats will save them from this unfolding nightmare.  The truth, however, is that they will painfully prolong the inevitable.  No matter how much they would like to paint it otherwise, they are just as much the party of the aristocratic class as the Republicans. They represent their interests, albeit in a less obnoxious manner than their conservative counterparts. But the effect is the same.  Their aim is to preserve the status quo that is steadily demolishing any chance of a viable future for coming generations.  Indeed, their plunder may usher this present generation into a dystopia only imagined in science fiction.

Their star candidate, Hillary Clinton, has a long, bloody history of supporting right wing coups and wars that decimated sovereign societies.  Unsurprisingly, her mentor is none other than the preeminent war criminal Henry Kissinger. And she has all but vowed to aggressively provoke a nuclear armed Russia and attack Iran on behalf of her Israeli benefactors.  But what is perhaps more troubling is her allegiance to the 1% of Wall Street, evidenced by her exorbitant speech fees at well heeled engagements and her condemnation of the Occupy Movement which sought to hold banks and corporate robber barons accountable for their malfeasance.  If she seizes power in the coming election we can be assured of an acceleration of plutocracy, not its reverse. 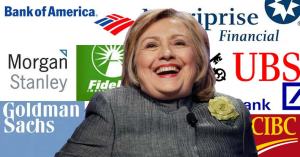 To be sure, the only real change in American policy has come from grassroots mass movements which upended the comfortable privilege of the aristocratic elite.  Whether demanding the end of the Vietnam War or equal rights for Black Americans, the power of social change has always stemmed from direct action from below, never from above.  But we are in new territory now and the outlook is uncertain. Fascism is undeterred by reason or reform.  It is their antithesis.  It festers in the dark corners of social hatred ever in search of a new scapegoat, and it thrives in an environment where there are fewer options for advancement or hope.  It replaces cooperation and rational debate with violent ridicule and meaningless, nationalistic jingoism.

We should not expect to see a fascism that mimics that of Hitler’s Germany, Mussolini’s Italy or Franco’s Spain.  This fascism is uniquely American in its flare.  Years of unfettered worship of all things military and an undying celebration of capitalism have furnished the masses with a disdain for the sustaining institutions that define a liberal democracy.  And the indifference of the liberal elite to the suffering of working people has stoked an animus that is palpable.  They will not endure sanctimonious preaching from the left on the deeply held virtues of tolerance and inclusion for much longer.  And this is largely due to being mercilessly thrown to the side for corporate privilege.  Their ranks are fed up and they are rising.

One thing is certain. A toxic brew of economic malaise and ecological decimation is simmering ever closer to the boiling point.  Alternatives to this horrifying future do exist within movements like Black Lives Matter, indigenous rights and climate justice; but if we do not face the dire outcome of this poisonous concoction with demands for revolutionary change soon, it may spill over faster than anyone can imagine.  And in its wake it will drown the civil rights and liberties that had been hard fought for, yet utterly taken for granted, in smoldering ruins.